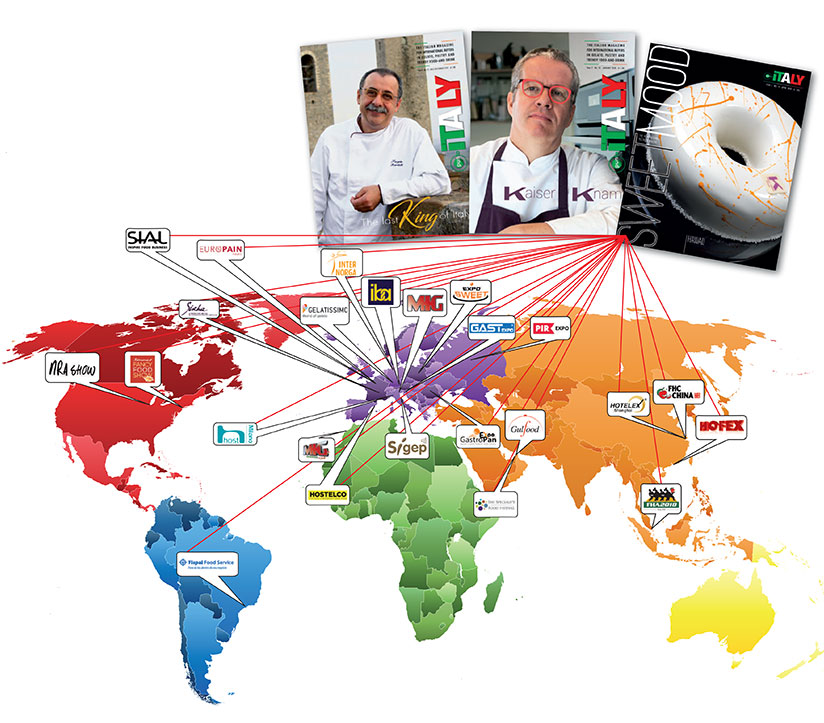 A chronicle of the trade fairs visited by PuntoItaly during its travels abroad. A first-hand reportage of meetings, emotions, and experiences.

The fascinating city of Paris is a great backdrop to start the adventure of our seventh “world tour” promoted by puntoItaly to support the art and professionalism of Italian companies. The French winter was truly bracing, with a cold wind blowing at the beginning of the event, foreshadowing the snow that would later arrive to whiten one of the most romantic cities of the entire planet.
The Europain stage resembles candy, not one of those chaotic events that mainly involve intermediaries busily searching for solutions to optimize their business, but rather a more theatrical representation where the main actors are the professionals who with the art of their craftsmanship churn out the best delights you could wish for over the course of four days.

There were many new developments at this edition: more than 100 new products were presented during the event to the delight of visitors who are increasingly frantically looking for new and captivating ideas.
In terms of ingredients we therefore witnessed a further expansion in products considered natural, organic, and guaranteeing transparency, while the world of equipment is increasingly focused on flexibility, ergonomics, and energy efficiency.
The event has maintained its international character as demonstrated by the official data, which confirmed a presence of foreigners above 30% and that allowed our magazine to meet with a very diverse public.

This is one of the most important trade shows for Italian artisanal gelato, but it is not held in Italy: this is the surprise of Gelatissimo, the area dedicated to the Italian dessert par excellence at Intergastra, an event that involves foodservice in all its forms.
“The concept of combining a complete range of products and an interesting support program has been successful.
Furthermore, there are good economic data that generally give new impetus to industry.”
These are the pillars of the event’s success according to Ulrich Kromer von Baerle, president of Messe Stuttgart.
Gelatissimo is a very important appointment for puntoItaly, which for this occasion brought together the progenitor magazine puntoIT in Italian and puntoDE, the magazine in German created specifically to meet the needs of consumers in Germany. Once again the event allowed us to meet many professionals from across the supply chain and to gather tips and suggestions to stimulate our desire to convey the Italian message all over the world.

The February Gulfood event is a fundamental crossroads for any company with international ambitions.
The organizers are well aware of this, stating about the event: “With the increase in regional investments in food production, international producers see the Middle East as a lucrative market for their products. In this dynamic climate, Gulfood continues to strengthen the global food and beverage community acting as an unstoppable trading platform offering industry professionals unrivaled market views and insights.”
These are the words of Trixie LohMirmand, senior vice president, Exhibitions & Events, DWTC, also supported by the belief that the UAE food and drink market alone will reach a value of 22 billion US dollars by the end of the decade according to Euromonitor International estimates.
Needless to say that for puntoItaly the winter visit to the United Arab Emirates is a key stop in its work of international promotion, always satisfying our ambitious expectations.

In its 10th edition, Expo Sweet confirmed its position as the largest trade show in the confectionery and gelato industry in Poland. It is an unmissable event for 42 all professionals interested in developing their businesses in the vast area of Central and Eastern Europe.
And once again, the exhibition facilitated the meeting of supply and demand thanks to a significant presence of companies that showcased the most advanced machinery, products, and services available in the international market.
Let’s not forget that with its classic format that brings together sweets, coffee, tea and alcoholic beverages, Polish pastry and gelato shops represent the ideal target for the supply of a particularly extensive product range.
The calendar of side events is also very busy, with exciting competitions featuring the best professionals.
In particular, the European Cake Decoration Championship was distinguished by an incredibly high level of pastry chefs who gave life to a competition of the highest level.

Since its debut 10 editions ago, the GastroPan international fair has proved to be a huge source of inspiration for the entire bakery industry.
Participating in GastroPan means coming into direct contact with the latest national and international trends in production technologies and equipment dedicated to its targeted sectors, along with ingredients, accessories, services, and IT products. At the exhibitors’ stands you can taste products made with new ingredients, making it possible to offer new ranges of products. The leaders of professional associations in Romania, Germany, and Hungary have confirmed that GastroPan is the most important event for the trade in Southeastern Europe.
“The bread industry would not be at the level it is today had it not been for GastroPan,” said Aurel Popescu, president of the Rompan trade association, during the opening ceremony. He was echoed by Ilonka Boldizsár, the ambassador of the UIBC – International Union of Bakers and Confectioners: “These types of trade shows are very important because they present the current trends in the bakery industry.
The first and most important trend we are seeing is the constant growth in quality of the sector in Romania. This is because Romanian entrepreneurs are investing more in their development. The most important factor is the taste and freshness of the products, while with respect to technology we are witnessing a progressive digitalization and automation of the trades.”

Boasting almost 120,000 square meters of exhibition divided into two distinct areas of events – Singapore Expo and Suntec Singapore – and visitors from over 100 nations/areas of the globe to see the products and services who have come to exhibit from over 70 different nations: these are numbers that sum up the great success of an event that continues to be a point of reference for the whole area of the Far East.
Our magazine participated in this important event in the heart of the new area expressly dedicated to the world of gelato, proud setting for the Asian Gelato Cup organized jointly by UBM and Singapore Pastry Alliance.
The competition saw 12 teams of gelato artisans and confectioners from all over Asia working hard for the inaugural title of the Asian Gelato Cup, which also served as a qualification round for the 2020 Gelato World Cup in Rimini, Italy. In the end it was the Singapore Team that took the top step on the podium, while the long-standing challenge of the Asian Pastry Cup saw Malaysia prevail in the qualification for the Coupe du Monde de la Patisserie in Lyon, France.
But we are only halfway through this year’s journey, and many other stops await our magazine in the second half of 2018.