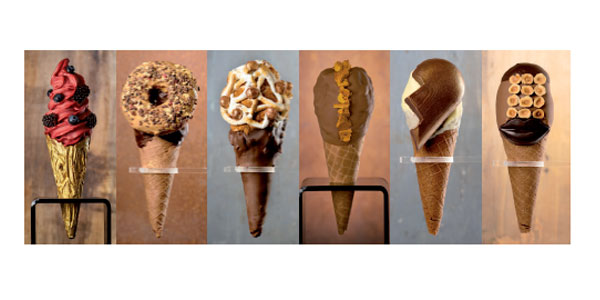 The innovation that the Giapo team is bringing to the world, is not just flavour specific, but multidimensional. It’s a new language for gelato.

That creativity and desire to alight for new territory has been at the heart of this project throughout the past decade or so, as Giapo has continued to thrive, disrupt and excite, while growing into one of the most innovative gelato kitchens in the world.
The success Giapo enjoys both on the international scene and in its home country of New Zealand, is poured right back into the business by the tight-knit Giapo team, who foster, and indeed feed off, this cycle of creativity.
The couple at the helm of Giapo, whose business cards openly state their occupation as “Wannabe Artists”, approach gelato as an art form. “I saw that gelato had the potential to be more expressive and gastronomical than it had been”, explains Giapo.
“It’s the most popular dessert food in the world and it didn’t seem right that it always had to look the same in cones and cups or on sticks.”
With the help of Annarosa, and by building a small, talented team with a strong collective spirit, Giapo is steadily managing to turn gelato into something new.

The innovation that the Giapo team is bringing to the world, is not just flavour specific, but multidimensional with a lot of dedication and a savvy flair for things like customer experience, culinary, scientific and technological, it is about writing what they like to call a “New  language for gelato”. Giapo’s gelato encourages people to leave behind expectations – which can be constrained and open their minds to new possibilities.
Which means there’s no gelato on display in the store.
Instead, it’s a refreshingly immersive and interactive experience as guests peruse a menu and are guided through the flavours, with a tasting degustation, by knowledgeable hosts.
Once you’ve settled on a taste or description that piques your interest, the rest of the story unfolds.
In the kitchen, chefs carefully construct each gelato order following an exact ethos full of rituals; there is a serene ceremonious quality to it. Gelato at Giapo isn’t just gelato. As Giapo sees it “Gelato, the way I approach it, is a way of demonstrating that change can be made through commitment and belief… a very delicious way of proving a point. I am continuously searching for new emotions, I’m inspired by freedom.”

Giapo hosts a design studio on site where 3D models are made and scrapped by the dozen until the wannabe artists are happy with the result. With the heart in changing the meaning of gelato and its function, Giapo’s curiosity for new things is never ending.
It’s unlikely anyone would ever have imagined eating a gelato translation of an Antarctic colossal squid until the Giapo team thought up the idea and worked intently on crafting it. Overnight the fantastical Colossal Squid sculpture became one of the most popular items on their menu,and added to the gelato lexicon worldwide. The dedicated R&D kitchen comes up with new break through, and scientific triumphs.
The team is right now investigating a way to make chocolate glow with the use of bioluminescent bacteria, in a study with Auckland University. He is also working on creating a “better” yoghurt, research done in conjunction with  Auckland University of Technology.

Giapo has co-authored several papers on the hedonistic effects of music and taste, an idea he launched 4 years ago, when he built a panasensorial dome.
The Giapo team is challenging our expectations by changing the very function of gelato.
It is not just food, but art, a wearable accessory; not just sweet, but also savoury; not just icecold, but also steaming hot. But the ultimate test of the Giapo team’s vision lies in the taste. With one lick, everything immediately makes delicious sense.
What Giapo does is take the most delicious thing we can put in our mouth and makes it more delicious yet by exploring the way all our senses come into play.
The Giapo vision is more personal, and more difficult to achieve.
Giapo is an adventurer and a risk taker.
He grasps the freedom to reach beyond the familiar and into the unknown, aspiring to invent novel and wonderful experiences to turn the most popular dessert food in the world, into something truly extraordinary. 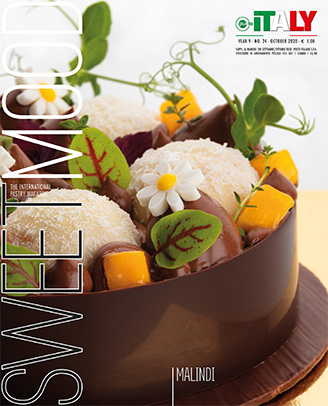